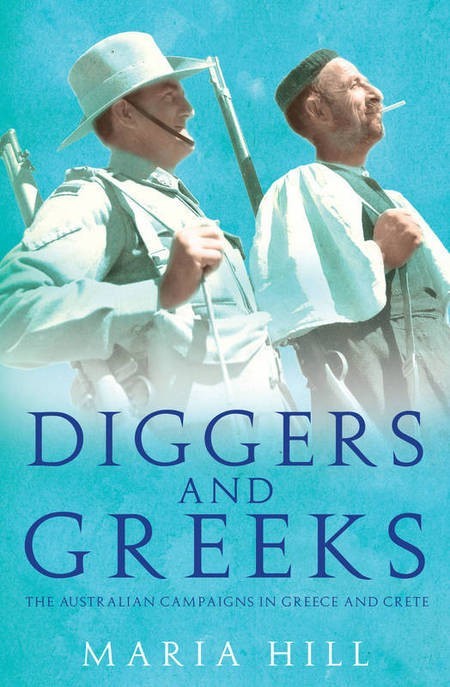 Available: Through University of NSW and its distributors, including all superior bookstores in Australia


Little is known about the real reasons that Australia committed troops to Greece. Australian historians have, for too long, neglected the Greek and Crete campaigns and what has been written until now, has ignored the Greek side of the story. Never before has the impact of fifth-column activity on Australia’s military relationship with Greece been investigated.

This compelling book combines details of the campaigns with an account of the response of Greeks and Cretans to the Allied forces on their soil. It reveals the personal relations that developed between Australian soldiers and Greek civilians and soldiers; these were sometimes hostile but in other cases developed into friendships that lasted decades after the war had finished.

Maria Hill has trawled through archives in Athens and Canberra to show that while miscommunication between the Greek General Staff and the allied forces was frequent, the situation on the ground was far more complex. Her book also shows why the campaigns on mainland Greece and Crete compelled people to behave in altruistic ways, even when it meant placing themselves in danger. It proves that it is possible to form successful relations with people of a completely different culture in conflict situations, and that those relationships are important and should be nurtured, as they are vital to the wellbeing of all involved.

Dr Maria Hill is a professional historian and educational consultant and the first Greek-Australian to write about the Australian campaigns in Greece and Crete. She is a former award-winning high school teacher whose publication Federation: Inclusion and Exclusion for the NSW Department of Education and Training earned her a Commonwealth Centenary
Medal in 2003. She was also the recipient of the State and National Discovering Democracy Award in 2001, and is the author with Ian Bickerton of Contested Spaces: The Historiography
of the Arab-Israeli Conflict (2003).

Currently she is Visiting Fellow at UNSW @ ADFA: The Australian Defence Force Academy in Canberra.

'Most studies of the Greek campaign have tended to gloss over the contribution of the Greeks. Maria Hill’s book adds a completely new perspective to the campaign. She tells great stories of the interaction between Greek people and Australian soldiers.’

‘In Diggers and Greeks Maria Hill considers existing accounts of the Greek and Crete campaigns alongside the Greek version of events. She offers a new understanding of those campaigns, to an extent where I doubt that existing interpretations can be viewed as the
whole story any more.’

– Dr Christopher Clarke, RAAF Historian and Head of the Office of Air Force History in the Air Power Development Centre at Tuggeranong, ACT.

Introduction: Why are the Greek campaigns
not remembered?
1 Greece: The Second Gallipoli?
2 Australia and the Greek campaign: Trickery and Deception
3 Spies, Treachery and the Greek-Australian Military Alliance
4 The Australian campaign on the Greek mainland
5 Sheilas, Nightclubs & Boozing: the Australian soldiers in Athens
6 Diggers and Greeks: relations between Aussies and their allies
7 The Battle for Crete: why was it lost?
8 The Australian Campaign at Rethymnon, Crete
9 The Cretan People
10 Australian soldiers on Crete: Indiscipline & Larrikinism
11 Behind Enemy Lines: ‘Evaders’ & ‘Escapers’
12 Escape from Greece: Diggers and their Greek helpers
13 Australians on the run in Crete
Conclusion: Relationships in Wartime
Appendices
Bibliography

Order your copy using the order form or via the web at this special link www.unswpress.com.au/code13/p146
to receive 20% off the normal price:

All prices are in Australian dollars and include 10% GST. Postage
Australia & NZ wide is AUD$9.90. Delivery within Australia is by Australia Air Express
.
Returns Policy

If a book is supplied misbound or misprinted, you are entitled to a
refund or exchange upon returning the book(s) with purchase details (receipt) and full contact details attached.

For author interviews, and other media enquiries: