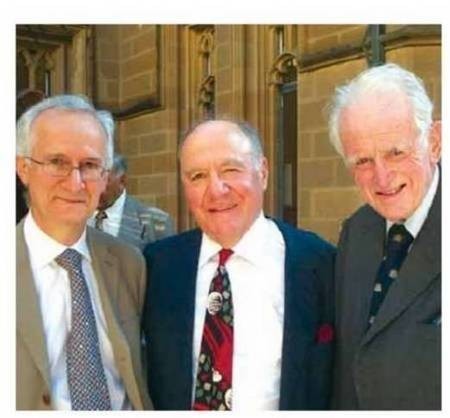 Left to right:Professor Ben Freedman, Mitchell Notaras and Rowan Nicks at a recent function to announce the Fellowship
.

From: Radius.
Newsletter of the Faculty of Medicine and Medical Graduates‘ Association:
April, 2004. p. 19

The University has received a donation of $1.1million. Mitchell is the son of a Greek immigrant. His father came from the island of Kythera and settled in Grafton,
in NSW. The family became prominent citizens in the town. Mitchell was educated at Grafton high school and
Newington College in Sydney. Drs Mulhearn and Harris,who were doctors in the town stimulated his interest medicine. Both of them had sons who later joined the staff of RPAH.

After graduation he spent two years as
resident medical officer at the hospital. During that time he became interested in surgery and met various visiting surgeons including Rodney Maingot with whom he was associated later in London.

Mitchell was appointed Consultant Surgeon at Barnet and Edgeware General Hospitals where he met and assisted Australian trainees.He was a teacher in surgery at the University of London.
He visited and lectured in many countries and was a named visiting Professor in Norway, Brazil and the Sudan.
Throughout his surgical practice his main interest was colo-rectal surgery.This was stimulated by his time at St Marks. While there he described and published the operation of lateral anal sphincterotomy which remains the procedure of choice for the treatment of anal fissure.
Despite having a busy surgical practice he established,with others, a company, bgene, which became a leader in Europe, specialising in the manufacture of molecular biological reagents, instrumentation and, through collaborations with universities and industrial partners, gene and DNA technology.After some years Abgene was taken over by the Apogent Corporation of the USA.
Dr Notaras studied medicine in Australia with the help of a Commonwealth Scholarship. He has remained grateful for the eduction he received at the Univeristy and the Hospital. He also had a desire to contribute to education, particularly in the field of colorectal cancer. As a result he has established a three-year scholarship which will be available to post fellowship scholars. The program is for one-year research at the University of Sydney, a year in an approved overseas unit of excellence and a year as a senior registrar in colo-rectal surgery at RPAH. The recipients will be selected jointly
by the University and the Colo-rectal Surgical Society. The scholars will be expected to proceed to a higher degree at the University.
To fund the scholarship, Dr Notaras has donated $1.1million. A scholar will be appointed every two years.

The 2004 Fellowship has been awarded to Dr Chris Byrne.