Photos > Working Life > George Miller and the value of patience

George Miller and the value of patience 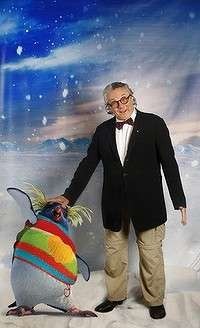 He has been shooting films since Mad Max burst onto the screen more than 30 years ago but George Miller says he is still learning.

"The big thing about animation is you learn much more forensically so much about filmmaking and storytelling and, indeed, life," he says. "I know more about eyes than I ever did as a doctor. And I know more about snow for someone who's never really been in the snow. Most of all I know more about camera."

Miller, the Oscar-winning director of Happy Feet and now Happy Feet Two, cites fellow director Roman Polanski's dictum that there is only one perfect place for the camera at any given moment.

"It's not until you do an animation that you realise how absolutely true that is," he says.

"When you're shooting a [live action] film, you're basically winging it. You go on instinct as to where the camera should go. Compositionally there are intuitive rules about how you might do things.

"But what's striking about animation is you can take absolutely the same performance, the same sound, and vary the camera and the cutting pattern and substantially influence or change a scene depending on what you choose.

"It's a bit scary because you realise it's incredibly subtle. It's a big commitment but the level of learning is very, very intense."

Miller has also learnt the value of patience.

"In all the years I shot, the time the film was actually running through camera totalled two weeks. All the rest of it was waiting."

The Sydney filmmaker has certainly needed that patience when it comes to shooting another Mad Max movie. He now plans to shoot the long-delayed fourth instalment, Fury Road, next year, with Tom Hardy (Inception, Warrior) starring.

The movie was due to shoot around Broken Hill until heavy rain turned the desert into a garden, making it decidedly unsuitable for a post-apocalyptic landscape. After an international search for a new location, the movie will be shot in Namibia.

Miller has also been seeking studio backing for another animated film he has written and expects to take "a godfather role" in its production while directing Fury Road.

If his interest was once in how best to tell stories for the screen, Miller says his focus has shifted in recent years to why we tell them. It's a subject he has discussed at length with his friend and "storytelling brother" Nico Lathouris, who would ask questions like what are the ethics of what you're doing, what's the purpose of what you're doing, and what are the ethical requirements of storytelling?

Says Miller: "I think [writer and director] David Hare pointed this out: the extraordinary thing is we have more stories available to us than any other time in history so we have a deep need for them.

"Napoleon read every single book in French because there weren't so many books written in French during his time. Now you go into an airport book store, and on one shelf – let alone what you can find on Amazon and Kindle and everything else – there are massive amounts of stories ... We have this intense need for stories."