Diggers and Greeks. Maria Hill. Book Launches & How to Buy 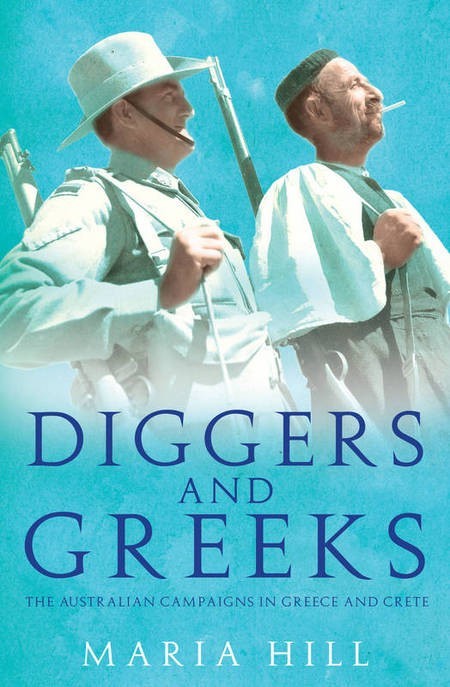 Diggers and Greeks is a culmination of eight years of research and writing.

The Kytherian World Heritage Fund (KWHF), cultural affiliate of the Kytherian Association of Australia, decided very early, to financially support Dr Hill’s book. We made this decision on the basis that KWHF delights in supporting good authors, particularly those writing on a Kytherian, Ionian, Minoan, Greek, and/or Greek-Australian themes. KWHF also supported Australians and Greeks, Vol I, II, & III and The Greeks in Queensland. Diggers & Greeks was therefore a natural extension of the theme, Greeks & …...... (Australians, or a sub-group thereof.)

At an event at Customs House, Sydney, held on 26 April during the 2009 Greek Festival, KWHF presented Dr Hill with a grant of $5000, to assist with the printing and publication costs of forthcoming book.

This grant enabled the book
1. to be produced in hardback
2. to have a larger format similar in size to the other publications we have supported.
3. to increase the amount of archival photographs contained in the book from 20 to 90.
4. to increase the word length from 110 to 145,000 words.
5. to re-draw the maps and include 20 instead of 5 maps as most books do.
6. to have colour maps on the endpapers both front and back.

Diggers and Greeks features heavily at this year’s Greek Festival of Sydney. Two events fall under the auspices of the Greek Festival – the Launch of the book at the Anzac War Memorial, Hyde Park, Sydney, on Tuesday 6th April 2010, and Maria in conversation with David Hill, Sunday 16 May 2010, Museum of Sydney.

Other launch events which have been organised by other groups are listed below.

We have heard so much up about Gallipoli and Kokoda, surely its time we ensured that the campaigns that link us so closely with the Australian community are commemorated so from a Kytherian point of view do try and attend the State Parliamentary Luncheon on the 21st April, 6pm to 10pm.

If you haven’t experienced the ambience of dining at State Parliament House, it is one well worth embracing. The State Attorney General, the Honourable John Hatzistergos will be the keynote speaker for the evening. It would be great to have a substantial Kytherian presence in attendance.

Do make a decision to buy the book. It is a very superior book. Certainly one of the best Australian military history books ever written, but arguably, as well, the best Greek-Australian history book per se, ever written. If you buy it from KWHF, some of the profits will be re-invested in future book publications, and other cultural activities.

*Note that the KWHF is self-funding; it does not rely on any direct funding from the consolidated revenue of its close affiliate, the Kytherian Association of Australia.

Diggers and Greeks: The Australian Campaigns in Greece and Crete

Launched by The Honourable Bob Carr

‘Reading Diggers and Greeks, I am reminded of the remarkable rapport between the Australian army and Greek citizens in World War II: Young Australian soldiers battling to protect Greek independence against the odds, ultimately failing but achieving an unprecedented friendship between a native people and an overseas army. Maria Hill tells a compelling story of the relationship that emerged between Australians and Greeks, for the first time in the detail it deserves and with a scholar’s command of the material, while not neglecting the Greek perspective but with a great feel for the emotions involved in these complex campaigns, inhabited by people both sympathetic and hostile to the Allied cause.’

Followed by a performance by ‘The Singing Belles’
of wartime favourites including an Andrews Sisters medley
http://www.thebelles.com.au/

Cretan Lyra and Lute playing by Andrew Parliaros and Angelo Goutzios and a performance by the Dance Group of the Cretan Association of Sydney and NSW.

*Light refreshment will be served at the conclusion of the launch.

Musical Performance provided by Andrew Parliaros and Angelo Goutzios of the Cretan Association of Sydney and NSW.

DAVID HILL former Chairman and Managing Director of the ABC and current President of the International Association for the Reunification of the Parthenon Sculptures is joining MARIA HILL to discuss her new book Diggers and Greeks on the Australian Campaigns in Greece and Crete.

Dr MARIA HILL is a military historian and an expert on the Greek and Crete campaigns. She has an Honours, Masters and PhD in History from the University of New South Wales. Maria is the first Australian historian of Greek descent to write about these campaigns, which has ensured that a Greek perspective has been included in a narrative, that often ignores Australia’s Greek allies. Currently, she is Visiting Fellow at the Australian Defence Force Academy in Canberra.

The discussion will be illustrated with rare archival photographs from the Greek and Australian archives and original film footage of the Australian campaigns in Greece.

Signed copies of the Diggers and Greeks will be available for purchase from the Museum Shop.

Musical interlude: Cretan Lyra and Lute playing by Andrew Parliaros and Angelo Goutzios and a performance of the Dance Group of the Cretan Association of Sydney and NSW.

Launched by The Honourable Lindsay Tanner,
Federal Minister for Finance and Deregulation

Followed by a performance of Cretan Lyra

Afternoon Tea will be served.

Books will be available for sale signed by the author

Morning Tea will be served.

Books will also be available for sale signed by the author,

Followed by performances of Cretan Lyra and Cretan Dance Group