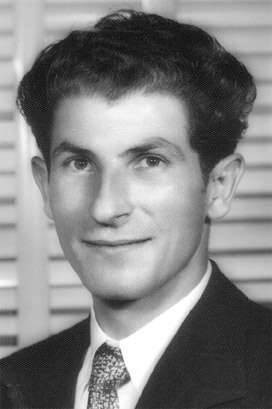 A young Peter Venardos, who took over the Acropolis Cafe, Gunnedah, NSW, Australia, in partnership with Theo Souris in 1945.

DURING his 67 years in Gunnedah, Peter Venardos made many lifetime friends and helped countless others in his quiet, unassuming way. Peter’s death on January 14 after months of very poor health, came as a great blow to a wide cross section of the community.

He was laid to rest beside his brother at Botany Cemetery after the funeral service at St Spirodon Church, Kensington, on January 21.

As many people were unable to attend the funeral, a memorial service has been arranged for Wednesday, February 3, at St Joseph’s Catholic Church, Gunnedah, at 11 am, followed by refreshments at Gunnedah Services and Bowling Club. Everyone is welcome to attend.

At the farewell service in Sydney, Peter’s eldest son George spoke about his father’s love for the community he adopted all those years ago.

“Those who knew him will remember him as a man who took pride in his work and gave back to the town that he believed gave so much to him,” George said. “He will be sorely missed not only by the community he loved but by those who loved him.

“He used to say ‘You’re here for a good time not for a long time’ and it seems that he was, in his own way, able to achieve both, as his passing in his 89th year is testament to his love of life and his persist¬ence and strong will.”

Panagiotis (Peter) Venardos was born in Ayia Anastasia, Kythera, Greece, on September 16, 1921. He migrated to Australia at the young age of 12. Like many other boy migrants to Australia, he never saw his mother again - she had died during the war years when Kythera was occupied by the Germans. Peter never returned to his place of birth but his father George came to Australia for an extensive visit, dying six months after returning to his island home.

One of six children, Peter stayed with relatives in Sydney for a short period moved to Tamworth in 1936, to join his brothers. He was apprenticed to a German baker in Tamworth in the days when all the pastry was rolled by hand. As a young man he worked tirelessly as a baker and waiter at the Golden Bell Cafe.

Peter came to Gunnedah in 1943, a place which remained home to him and his wife Diana for the next 67 years. He entered into a business partner¬ship with his brother-in-law, Theo Souris, purchasing the Acropolis Café on Gunnedah’s main street.

Hard work was the foundation of Peter’s life and many people can all recall him saying ‘hard work never killed anybody’. This is a lesson he instilled in his three sons George, Jim, and Paul, and one he adapted to his business career.

The Acropolis was Peter’s first business endeav¬our in Gunnedah but certainly not the last. Peter also acquired the White Rose Café from the Zantos brothers, and thrived in the social atmosphere that he felt brought the community together, and got people talking.

Adapting his extensive knowledge of the café business, Peter went on to open Thriftway super-market in 1957, which was to be the first of its kind in the northwest of NSW.

The concept itself was innovative for its time as Thriftway was the first in Australia to house groceries, a butcher, deli, fresh fruit and vegetables, and a café, all under the one roof.
“Thriftway became a hub of social discourse for the community of Gunnedah, an idea Peter took joy in, as it allowed him to extend his services to those in need throughout the district,” George Venardos said. “Community service was an essential part of his life and something he attributed to his success in business.”

It is well recognised in Gunnedah that Peter believed strongly in lending a helping hand to those less fortunate. He believed that no one should go to sleep hun¬gry, and was known to give many hot meals for free, or in exchange for odd jobs.

Community to him was not only centred around giving to those in need but in improving facilities and showing support for those organisations dedicated to serving the public of Gunnedah. Peter belonged to many clubs and public organisations. Socially, he was a member of the Gunnedah Fire Brigade, Rotary Club and the Gunnedah Free Masons Lodge.

“The Coffee Club at Thriftway is one particular social group he enjoyed the most,” George told the congregation at the funeral service.

“Sharing coffee and stories with good friends allowed for a balance of work and play. “Members of this group were some of Peter’s most beloved friends who knew him best. “Roasting him for his unique way of measuring things: ‘That’s great but would it kill a brown dog?’ these friends awarded him a trophy for the ‘most killings’ in one day”.

Support for local law enforcement was very important to Peter Venardos. He became a Justice of the Peace in support of the Gunnedah Police, who he felt were an essential part of any small town.

Sport was one of Peter’s great passions. He believed that everyone should learn to swim and that sport was important for children as it was an essential part of a healthy life and was a great way to meet friends.

The tragic drowning death of a cousin in the Namoi River on Christmas Day caused him great grief and he joined the local crusade for a town swimming pool. He strongly believed that everyone should learn to swim and when the pool opened in 1955 he became actively involved in the swimming club, firing up the “woofer” every morning to heat water in the wading pool which had been covered with plastic for winter training.

By 1970 Peter’s son, George, had claimed a string of NSW titles and was recognised as the holder of six Australian swimming records.

Peter was also actively involved with the cornmunity effort to raise funds for the heated swimming pool and was honoured with Life Membership of the Gunnedah Amateur Swimming Club.

During the winter months, the swimmers would attend the PCYC for boxing training, to keep fit. Peter had done some boxing in his time and he loved being there to strap them up, George Venardos recalled.

All of Peter’s boys were encouraged to play sport and he always took pleasure in watching them participate and excel in different disciplines. Peter was also involved in the formation of water polo in Gunnedah.

Peter finally retired in 1994 at the age 72. He maintained his friendships and was an influential member of the Gunnedah community.

The late Peter Venardos is survived by his wife Diana, (Gunnedah), three sons and their families - George and Robyn, Liza and Sophie, (McMahon’s Point), Jim, and his daughter Artemis, (Northern Territory), and Paul and Joanne, Amy, Jack, Luke and Max (Panania). He is also survived by his brother Mick, aged 94, of Randwick.