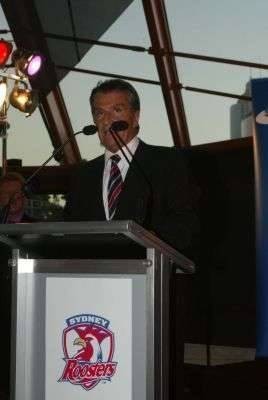 [Nick Politis was born in the town of Karavas, Kythera, in what was then the Agricultural School. His father George was the agricultural teacher at the School. Nick attended school in Karavas. The Politis family emigrated to Australia when Nick was still a young boy.
The family settled in Brisbane.

Nick has since become one of Australia's more successful and wealthy businessmen, Soccer Owner's and Adminstrator's, and Rugby League Admistrator's.

This article outlines his prowess in the latter capacity.]


How Roosters laid a golden egg

Once ridiculed as the transit lounge of rugby league, the Roosters have now been upgraded to first class. Brad Walter reports.

For suspended Sydney Roosters lock Luke Ricketson, missing the grand final against the Bulldogs tomorrow is even more devastating because he knows what it was like to have played for the club before its latest golden era.

Ricketson, whose 279 first-grade appearances since 1991 are the most by any player in the Roosters' 97-year history, is the only on-field link to the period when the club was nicknamed the "transit lounge".

While the Roosters - playing their fourth premiership decider in the past five years - have now qualified for the finals series every year since 1996, the previous decade was one in which they did not feature at all.

"In 1992 we just missed out [on the play-offs] by one point and in 1995 Norths got in ahead of us on for-and-against, but it was a long time since the club had been successful," Ricketson said.

"I remember we used to go to functions and they'd always play the 1975 grand final and talk about Jack Gibson and Arthur Beetson."

Until the premiership success of 2002, the Roosters did not have any other silverware to put in their trophy cabinet and during that time no less than 10 coaches came and went, including Beetson - who had three stints in charge.

The turnover of players was even more dramatic, with many big names such as Bob Fulton, John Harvey, Noel Cleal, Paul Vautin, Joe Lyon, Martin Offiah and Gary Freeman accepting big money to play for the club, but few stayed for long.

"They used to call it the transit lounge because there was a player at every other club that had played for the Roosters," said former Test prop Paul Dunn, who played for the Roosters in 1985-86 and again in 1996. "It was a good place to play but it wasn't really a professional place. The second time I was there, that was the direction they were heading. I suppose they got fair dinkum about their football."

Most believe, however, that THE GROUNDWORK FOR THE TRANSFORMATION OF THE CLUB COINCIDED WITH ROOSTERS SUPREMO NICK POLITIS TAKING CONTROL OF THE FOOTBALL CLUB AFTER THE 1992 departure of Easts Leagues Club secretary-manager Ron Jones.

Hand-picking his own team of directors, which now includes James Packer, Channel Nine boss David Gyngell and Mark Bouris of Wizard Home Loans, the Roosters have not had to hold board elections for more than 10 years, as there have been no disgruntled members to challenge them.

"There's no doubt that the current success of the club is the result of 15 years of hard work by Nick," said former ARL general manager John Quayle, a member of the Roosters' 1975 grand-final-winning team. "If you go back to the mid-1980s when the league was looking very closely at its struggling clubs, Easts were one of those ... so to turn things around the way they have is a tribute to Nick and his board. The changes he introduced brought stability and a professionalism ... which is now the benchmark of how a football club should be administered and coached."

Former teammate Russell Fairfax, who now works for Fox Sports after a brief stint coaching the Roosters in 1989 and 1990, agrees. "Back when it was affectionately known as the transit lounge the club was run basically by the leagues club and it wasn't a football-orientated management team," Fairfax said.

"Perhaps the buying [of players] could have been better handled and they wouldn't have got that tag but it wasn't administered by people that knew how to handle sport. They got professional people in to run the club; before it was basically run by one man, Ron Jones."

Beetson, whose second stint as coach preceded Fairfax's reign, set up the development and recruitment structure that has ultimately led to the Roosters getting all three teams to the grand final tomorrow after filling in in an interim capacity when Mark Murray was sacked in 1994.

But it was undoubtedly the poaching of Phil Gould from Penrith the following season that set the club on course for the success it has achieved in the past nine seasons.

Coinciding with the outbreak of the Super League war, Gould - as NSW Origin coach - was able to give the Roosters a profile they had not previously enjoyed, and when the Panthers became the last club to defect from the ARL, Brad Fittler and Matt Sing followed him to Bondi.

"I think that was the reasoning behind getting Gus, to attract good players," said trainer Ron Palmer, who joined the club as a member of Beetson's coaching staff in 1987.

Yet under the direction of Beetson, the Roosters' recruitment has been more selective - with the focus on developing talent rather than buying big-name stars. "They've probably got one of the best recruiting systems in the game and the quality of the coaches they have had over the past 10 years has obviously had a lot to do with it," Dunn said. "Ricky Stuart has added his own touches but I think he has also reaped the benefits of what was done the preceding six or seven years under Phil Gould and Graham Murray."

Away from the field, the Roosters have exerted greater influence through Politis's position on the NRL partnership committee and Gould's involvement in the media with Channel Nine and Fairfax newspapers.

Incidents such as Politis's attack on the judiciary system in the wake of Ricketson's suspension have led to criticism of the club as being self-centred and not interested in the overall wellbeing of the game.

But Quayle said the Roosters' image as the "new Manly" was due largely to jealousy of their success.

"I think it's the same as has happened in the past to the Canterburys, the Parramattas, the Brisbanes and, of course, the Manlys," Quayle said. "Being envied by other clubs only comes with success and the Roosters are going through a golden era at the moment to rival the ones they had in the 1930s and the mid-1970s.

[Luke Ricketson was suspended for 3 weeks for striking an opponent in the Preliminary Final against the North Queensland Cowboys.]