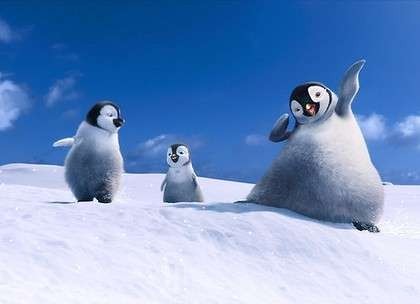 On the set of Happy Feet Two Oscar winner George Miller opens up about emotional, intellectual and visceral storytelling (and dancing penguins).

A brutal deadline for Happy Feet Two is looming but George Miller could hardly be calmer as he reflects on how he has spent the past 3½ years.

''Here I am telling stories about singing and dancing penguins and six or seven hundred people are following me down that yellow brick road,'' he says, genially. ''It could be a madness.

''There's a millennium-and-a-half of human years put into this film. That's a crazy effort to put into a 90-minute film. So you've got to ask yourself the question: what's the purpose of doing it?''

..The acclaimed filmmaker is working with animation so complex it requires a ''render farm'' with 19,000 computer processors to create scenes, yet the location of the enterprise is decidedly 19th-century industrial.

Miller, beaming behind glasses, is talking in an old railway carriage converted into a conference room in the middle of the cavernous former locomotive workshop at CarriageWorks. His office is a construction hut plonked inside the building, near a crane.

All around, more than 600 crew recruited from 30 countries are working at computers, finessing the details of wings flapping, penguins waddling and snow scattering for the 3D sequel.

''You go back a century and there would have been people forging steel and making railway stock and massive cranes and people shouting,'' Miller says. ''Now they're making water and snow and fluff and hair and feathers on their computers.''

And the purpose of doing a sequel? For Hollywood studio Warner Bros, that's easy. Made in Sydney, Happy Feet charmed audiences worldwide with a comic story about Mumble the tap-dancing penguin, taking an impressive $US384 million at the box office. It beat Pixar's Cars to win an Oscar and entered popular culture to the extent that a lost penguin in New Zealand was named after the movie.

But for Miller, it's all about the storytelling. It's certainly not the awards, given he needs to ask his assistant where his Oscar is kept when Spectrum asks and has given away most of the rest.

The former doctor, 66, is deeply interested in not just how to tell stories but why we are driven to tell them.

''When you get down to it, you realise that stories do have a function,'' he says. ''It's clear that the way we survive as much as anything else is through narrative - the way we make the world coherent. I think it's wired into us …

''Our ancestors needed very powerful narratives and accurate narratives to help conduct their lives - all their moral codes, all their observations of the world, all their science was held in stories. Probably the most spectacular example of that is the Australian indigenous culture. We continue to do that, mostly unconsciously, but we do it.''

Happy Feet Two, which opens in more than 3600 cinemas in the US this weekend, has Mumble dealing with a son, Erik, who can't dance but wants to fly. Elsewhere in the Antarctic, a krill named Will tires of living at the bottom of the food chain and sets off on an adventure with his terrified friend, Bill.

The voice cast includes Elijah Wood returning as Mumble and Robin Williams as Ramon and Lovelace, with singer Pink replacing the late Brittany Murphy as Gloria.

Miller started thinking about a sequel before Happy Feet was released. He traces his vivid imagination back to a childhood based around play - without television - with his brothers in the Queensland town of Chinchilla.

''I thought as I got older my imagination would diminish,'' he says. ''But because I've been doing it all my life, it's even more active. Maybe a sign I'm going crazy. I have an intense imaginative life. There are so many stories; they just keep on coming.

''That's why I like writing: once you immerse yourself in a world, the characters and the world keep on playing on you … You live in an imaginary world with your imaginary friends.''

While it has an environmental theme that could easily upset conservative commentators just as happened with the original Happy Feet, the sequel is partly about parenting.

''It's Mumble trying to deal with his child as the world is in a rapid state of change,'' Miller says. ''Events are taking over. It's not leisurely parenting - he has to do it while the world is swirling around them, which is as it is for us. So it's not so much what he says to his child that influences him, it's what he does.''

The movie started with a script written by Miller with Gary Eck, Warren Coleman and Paul ''Flacco'' Livingston, which reflected what was learnt during a weeklong workshop with Antarctic experts. More than two years ago, this was turned into a rough prototype of the movie called a story reel, with basic animation and temporary voice-overs.

''We had a full run of the film that we could play for the whole crew, before the incredibly detailed and expensive work where we've got A-list actors coming in,'' says the co-director and director of photography, David Peers.

''We can actually watch the film and go 'this part's kind of slow, that doesn't work at all, people are confused at what that scene's about and everyone finds that character annoying' and all those kinds of things. So we can go in and revamp it.''

Miller wanted to know how everyone responded to the story reel, even the receptionists and cleaners. He is famous for remembering the names of crew members.

''We'd have big rallies out on the motion-capture floor where there was a wandering microphone so people could say 'I think Mumble is a dickhead because he did this' and so on,'' Peers says. ''You just find out where things are working and where they're not.''

At an early stage, every element of the Antarctic setting, including landscapes and characters, had to be created on computer. In the motion-capture process, performers including star tap dancer Savion Glover were covered in reflective discs, filmed dancing, then converted into digital penguins a second later on nearby screens.

Animators visited a zoo to study the way water beads off penguin feathers or take photos of leopard seals. Other times, they made faces in the mirrors on their desks and re-created the expressions on their characters.

The photorealistic style that made Happy Feet stand out from other animations five years ago adds to the complexity. Carrying it off for birds and animals is highly detailed work, especially when it comes to something like non-verbal communication.

''To be able to convince an audience that Mumble is unsure of something or is questioning something or is worried by something, all of that comes from facial expressions that are animated frame by frame,'' the animation director, Rob Coleman, says. ''So there's incredible detail put into what I call the micro movements around the eye - the movement of the eye itself, the dilation of the pupils, the movement of the head, just the slight pursing of the beak - just to tell you he's a thinking character.''

It doesn't stop there. Making the Antarctic landscape look realistic is a scientific as well as creative exercise.

''[We study] the behaviour of light on surfaces,'' says the production designer, David Nelson. ''We trace the light bouncing through the surface of the snow and how the light scatters about in the snow. We work out the refraction indexes of things, we talk in terms like 'sub-surface scattering' and we consider the absorption of the colour of the light as it goes into water.''

All those ''millennium-and-a-half of human years'' have gone towards the movie working on multiple levels - not just as fluffy entertainment.

''Stories have to be experienced at every possible level of the human being,'' Miller says. ''You have to experience a story emotionally, intellectually, viscerally. It affects the groin, the heart, the brain, the spirit. It affects an audience anthropologically …

''Some people look at the film and just might enjoy the dancing or some of the songs. It's very spectacular in 3D, so you might just enjoy being in Antarctica and seeing the spectacle … The thing I most want is that people get an immersive and hopefully meaningful experience from being in the cinema.

''The other thing is: the better the film, the longer it will follow you out of the cinema. You might remember it 10 years later or you might forget it before you get to the car park.''

Happy Feet Two opens in cinemas, in Australia, on December 26.

As writer, director and producer, George Miller has been a leading figure in Australian film for more than three decades.

His first success was with 1979's high-octane Mad Max, followed by the sequels Mad Max 2 and Mad Max Beyond Thunderdome. He plans to shoot a long-delayed fourth Mad Max,Fury Road, in Namibia next year.

He also directed the landmark mini-series The Dismissal (1983) and followed up by producing Bodyline, Vietnam and Bangkok Hilton.

In Hollywood, Miller unleashed Jack Nicholson in The Witches of Eastwick (1987).

In 1993, he had his first Oscar nomination with Nick Enright for the screenplay for Lorenzo's Oil, which he also directed. He was nominated again as producer and writer with director Chris Noonan of the global hit Babe (1995).

''Matt Damon was between two Clint Eastwood movies and literally had a three-day break,'' the director says. ''He said his kids insisted he do it.

''And Brad, we'd talked in the past about doing a couple of films together. I said, 'Hey, do you want to do this one?'''

There was just one problem. The script had Pitt's character, Will, saying the line ''Will you please shut up.''

Miller agreed. The character now says: ''Will you please be quiet.''