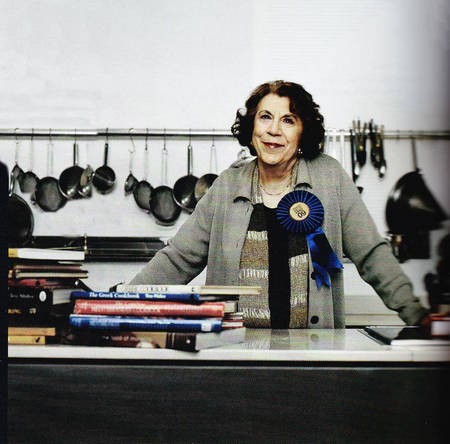 Inducted into the Food Hall of Fame, along with fellow Kytherian, Con Prineas.

Now in its 7th year, the Sydney Magazine’s annual Food Hall of Fame continues to shine a light on the often unsung heroes of the local food revolution.

This year’s inductees have been selected by the expert panel of Helen Greenwood, Jared Ingersoll, Simon Johnson, & Joanna Savill, to honour excellence in food. They looked for individuals, excluding chefs, who have been consistently at the top of their field and who have influenced the way we eat and our attitude to food. They also considered qualities such as passion, flair, commitment and longevity,

Sydney Magazine invites all Australians to celebrate the 2009 inductees’ accomplishments and thanks them for their dedication.

Tess Mallos has found a way into the homes of most Australians. If it wasn’t as resident chef when Good Morning Australia burst onto our screens in 1981, one of her cookbooks may be on your bookshelf. She has no idea how many books she has sold but estimates the worldwide figure to be about 1.5 to 2 million. She has written 16 since her first, The Australian Book of Meat Cookery, in 1972. “She’s an unsung hero,” says Joanna Savill. ‘She has documented cuisines such as Greek and Middle Eastern that weren’t as trendy at the time.”

The daughter of Greek immigrants, Mallos grew up in Casino, west of Lismore, where her father owned the Marble Bar Café. “My mother had a huge garden, growing things like zucchini, zucchini flowers and eggplant. Our kitchen gave me a great head-start because it took Australia a long time to catch up.”

Although Mallos had aspirations to study pharmacy, her father didn’t believe in higher education for women, so she moved to Sydney and worked as a secretary before marrying John Mallos in 1955. They relocated to Delegate, in NSW’s Southern Tablelands, where they ran The Delegate Café for five years. But it wasn’t until she moved back to Sydney in 1961 that she started to make an impact on the food world. Mallos’s sister, Ellen, who was working in advertising, asked for her assistance in creating a test kitchen to help her agency pitch for the Rice Marketing Board account. A career as a freelance food consultant was born.

Mallos laughs at the difficulty she had in convincing publishers that Australians were ready for her Greek Cookbook (1976). Her 1979 book, Middle Eastern Cooking, remains her biggest mover with sales of about 650,000. “People think migration changed our table and it certainly helped. But it was Australians travelling overseas that really shaped things. It opened people up to food. They’d go to Singapore and come back with a wok.”

MaIlos has never lost her passion to educate along the way. Nor has she slowed down, last year releasing The Food of Morocco. “I am,” she says. “76 years young.

Con Prineas was born to be a fruit and vegetable pioneer. His parents ran the Hollywood Café and Fruit Market in Mudgee and by the time he was 17, he was travelling to Flemington Markets twice a week to buy fresh produce for the business. He loved the markets so much that he moved to them full-time, working as a buyer. ‘The markets were really different in those days,” he recalls. “There were no fork-lifts or road transport: 40,000 cases of tomatoes would arrive by rail car, be unloaded by hand, and then put on the floor by hand.”

For the past 34 years, he has been an importer — and a fruit and veg trendsetter. “Con is a legend at the markets,” says panellist Simon Johnson. “He was the first importer of dates, led the way with citrus varieties and is still breaking new ground with garlic from California.”

In the mid-70’s, Prineas was on holiday in the US when he discovered Medjool dates. “I found them in a health-food store and was instantly taken by the flavour,” he says. “I decided to bring them in, first from California and then Arizona. Same with pomegranates; I brought them in from Fresno and it stimulated farmers locally to go into it.” When Prineas started importing lychees 25 years ago, he says there was virtually no local production. He whet farmers’ appetite for production, as he did with the tangerine, and the Kent variety of mango.

Prineas tutored Sydney chefs on the ins and outs of Sydney’s markets, but rallies against the current generation. “I don’t think the quality is there in restaurants any more,” he says, pointing to mixed bags of salad as an example of sliding standards.

His latest crusade is to discourage inferior imports such as garlic. The 80-year-old, who still spends some three months a year overseas working with farmers and exporters, waxes lyrical about the garlic he has found in California, Central and South America. “The moisture content in Mexican garlic is really something.”