Volunteer Steve Horan, who will receive a bionic eye this year. 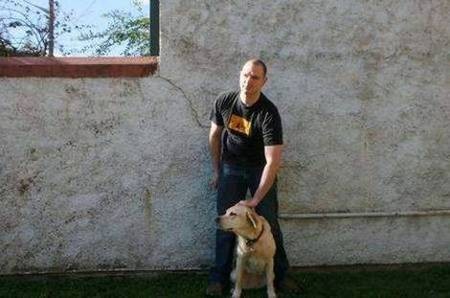 Bionic breakthrough in sight with a (Kytherian)-Australian first.

Using the same cochlear technology that allows the deaf to hear, the device aims to restore basic vision in patients with degenerative eye diseases, allowing them to walk without a cane or guide dog and differentiate between night and day.

Minas Coroneo and Vivek Chowdhury, from Sydney's Prince of Wales Hospital, say the visual prosthesis could be the first - and cheapest - to hit the world market.

Rather than "reinventing the wheel", they have adjusted the cochlear implant to allow patients to perceive light, rather than sound.

It should not cost much more than a cochlear device - $20,000. Instead of a microphone, it will use a camera and more electrodes.

There are 23 groups around the world racing to invent the first functional bionic eye. The ultimate goal is a permanent implant with enough resolution to enable patients to recognise faces and read large print.

But while others - including two rival Australian groups - are working on a prosthesis to be implanted inside the eye on the retina (intraocular), Professor Coroneo's and Dr Chowdhury's device puts electrodes on the outer wall of the eye (extraocular).

The two ophthalmologists, who formed the Australian Bionic Eye Foundation, say their approach is safer, reversible and won't threaten what little vision some people have.

Four overseas groups have implanted prototypes in humans but have failed to prove benefit, or have had serious complications. In 2006, Professor Coroneo and Dr Chowdhury conducted a clinical trial of 20 patients to determine which types of blindness would respond to stimulation. In many conditions causing blindness, the retina is damaged but the nerves connecting to the brain remain largely intact and can be activated by electrical stimulation. It won't work for people born blind.

So far the research has cost just $100,000 and they have asked Federal Health Minister Nicola Roxon for $10 million to begin clinical trials.

Following successful animal studies this year, the researchers have drafted three surgeons to soon implant the device in a cadaver.

By the end of the year, two or three volunteer patients, including Marrickville man Steve Horan, 30, will have a temporary device implanted.

Mr Horan was born with retinitis pigmentosa, for which there is no treatment or cure. As a child he could read a phone book and attend school. Now legally blind, he relies on his guide dog, Casey.

This prototype won't give him any more vision than he now has, but as he ages and his limited sight deteriorates to nil, the device could help. "For people who have no vision to be able to at least navigate and identify basic things would be amazing," he said.

Mr Horan will wear a pair of glasses mounted with a tiny camera that sends images to a small wearable pocket computer, which translates them to a line of 22 electrodes draped over the eye. These electrodes evoke small spots of light in the patient's visual field called phosphenes that trace the outline of solid objects. How the brain interprets the phosphenes remains unknown.

Other researchers are focusing on experiments with more sophisticated, intraocular devices that may help sight-impaired people read.

Professor Coroneo said: "We have been criticised because it was considered such a crude approach it couldn't possibly work but a device that's so sophisticated it would enable reading, we think, is not doable any time soon so we think this is a great starting point."

A functional bionic eye was identified as a key health goal at the 2020 summit in April.

"We believe, in Australia at least, that we're the closest group to getting this done in a patient," Professor Coroneo said.