submitted by Kytherian Religious Consciousness on 13.01.2014 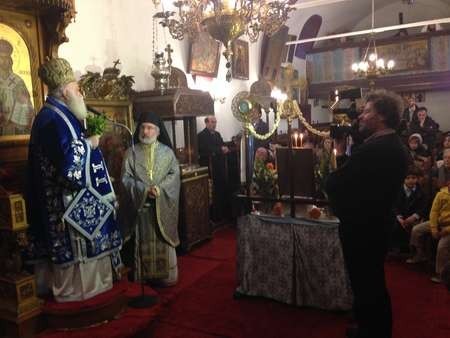 conducting the ceremony of Epithany, on the morning of the 6th January, 2014.

At the church of the Stavromenos, Hora.

For the meaning of Paramony and Epithany, read below.

Epiphany (Koine Greek: ἐπιφάνεια, epiphaneia, "manifestation", "striking appearance") or Theophany (Ancient Greek (ἡ) Θεοφάνεια, Τheophaneia meaning "vision of God"), which traditionally falls on January 6, is a Christian feast day that celebrates the revelation of God the Son as a human being in Jesus Christ. Western Christians commemorate principally (but not solely) the visit of the Magi to the Baby Jesus, and thus Jesus' physical manifestation to the Gentiles. Eastern Christians commemorate the baptism of Jesus in the Jordan River, seen as his manifestation to the world as the Son of God.

The observance had its origins in the Eastern Christian Churches and was a general celebration of the manifestation of the Incarnation of Jesus Christ. It included the commemoration of his birth; the visit of the Magi to Bethlehem; all of Jesus' childhood events, up to and including his baptism in the Jordan by John the Baptist; and even the miracle at the wedding at Cana in Galilee.It seems fairly clear that the Baptism was the primary event being commemorated.

Adoration of the Magi by Bartolomé Esteban Murillo, 17th century (Toledo Museum of Art, Ohio.
Christians fixed the date of the feast on January 6 quite early in their history. Ancient liturgies noted Illuminatio, Manifestatio, Declaratio (Illumination, Manifestation, Declaration); cf. Matthew 3:13–17; Luke 3:22; and John 2:1–11; where the Baptism and the Marriage at Cana were dwelt upon. Western Christians have traditionally emphasized the "Revelation to the Gentiles" mentioned in Luke, where the term Gentile means all non-Jewish peoples. The Biblical Magi, who represented the non-Jewish peoples of the world, paid homage to the infant Jesus in stark contrast to Herod the Great (King of Judea), who sought to kill him.[17] In this event, Christian writers also inferred a revelation to the Children of Israel. Saint John Chrysostom identified the significance of the meeting between the Magi and Herod's court: "The star had been hidden from them so that, on finding themselves without their guide, they would have no alternative but to consult the Jews. In this way the birth of Jesus would be made known to all."

The earliest reference to Epiphany as a Christian feast was in A.D. 361, by Ammianus Marcellinus St. Epiphanius says that January 6 is hemera genethlion toutestin epiphanion (Christ's "Birthday; that is, His Epiphany"). He also asserts that the Miracle at Cana occurred on the same calendar day.

In 385, the pilgrim Egeria (also known as Silvia) described a celebration in Jerusalem and Bethlehem, which she called "Epiphany" (epiphania) that commemorated the Nativity of Christ. Even at this early date, there was an octave associated with the feast.

In a sermon delivered on 25 December 380, St. Gregory of Nazianzus referred to the day as ta theophania ("the Theophany", an alternative name for Epiphany), saying expressly that it is a day commemorating he hagia tou Christou gennesis ("the holy nativity of Christ") and told his listeners that they would soon be celebrating the baptism of Christ. Then, on January 6 and 7, he preached two more sermons, wherein he declared that the celebration of the birth of Christ and the visitation of the Magi had already taken place, and that they would now commemorate his Baptism. At this time, celebration of the two events was beginning to be observed on separate occasions, at least in Cappadocia.
Saint John Cassian says that even in his time (beginning of the 5th century), the Egyptian monasteries celebrated the Nativity and Baptism together on January 6.The Armenian Apostolic Church continues to celebrate January 6 as the only commemoration of the Nativity.

The Koine Greek ἐπιφάνεια, epiphaneia derives from the verb "to appear" and means "manifestation," "appearance." In classical Greek it was used of the appearance of dawn, of an enemy in war, but especially of a manifestation of a deity to a worshipper (a theophany). In the Septuagint the word is used for a manifestation of the God of Israel (2 Maccabees 15:27). In the New Testament the word is used in 2 Timothy 1:10 to refer either to the birth of Christ or to his appearance after his resurrection, and five times to refer to the Second Coming.

Forefeast: The liturgical Forefeast of Theophany begins on January 1, and concludes with the Paramony on January 5.

Paramony: The Eve of the Feast is called Paramony (Greek: παραμονή, Slavonic: navechérie). Paramony is observed as a strict fast day, on which those faithful who are physically able, refrain from food until the first star is observed in the evening, when a meal with wine and oil may be taken. On this day the Royal Hours are celebrated, thus tying together the feasts of Nativity and Good Friday. The Royal Hours are followed by the Divine Liturgy of St. Basil which combines Vespers with the Divine Liturgy. During the Vespers, fifteen Old Testament lections which foreshadow the Baptism of Christ are read, and special antiphons are chanted. If the Feast of the Theophany falls on a Sunday or Monday, the Royal Hours are chanted on the previous Friday, and on the Paramony the Vesperal Divine Liturgy of St. John Chrysostom is celebrated and the fasting is lessened to some degree.

Theophany Crucession. The priests throw a wooden cross in the Yantra river. Believers will then jump into the icy waters to "save" the cross.

Blessing of Waters: The Orthodox Churches perform the Great Blessing of Waters on Theophany.[42] The blessing is normally done twice: once on the Eve of the Feast—usually at a Baptismal font inside the church—and then again on the day of the feast, outdoors at a body of water. Following the Divine Liturgy, the clergy and people go in a Crucession (procession with the cross) to the nearest body of water, be it a beach, harbor, quay, river, lake, swimming pool, water depot, etc. (ideally, it should be a body of "living water"). At the end of the ceremony the priest will bless the waters. In the Greek practice, he does this by casting a cross into the water. If swimming is feasible on the spot, any number of volunteers may try to recover the cross. The person who gets the cross first swims back and returns it to the priest, who then delivers a special blessing to the swimmer and their household. Certain such ceremonies have achieved particular prominence, such as the one held annually at Tarpon Springs, Florida. In Russia, where the winters are severe, a hole will be cut into the ice so that the waters may be blessed. In such conditions, the cross is not cast into the water, but is held securely by the priest and dipped three times into the water.

The water that is blessed on this day is known as "Theophany Water" and is taken home by the faithful, and used with prayer as a blessing. People will not only bless themselves and their homes by sprinkling with Theophany Water, but will also drink it. The Orthodox Church teaches that Theophany Water differs from regular holy water in that with Theophany Water, the very nature of the water is changed and becomes incorrupt,[43] a miracle attested to as early as St. John Chrysostom.[44]

Theophany is a traditional day for performing Baptisms, and this is reflected in the Divine Liturgy by singing the baptismal hymn, "As many as have been baptized into Christ, have put on Christ. Alleluia," in place of the Trisagion.

House Blessings: On Theophany the priest will begin making the round of the parishioner's homes to bless them. He will perform a short prayer service in each home, and then go through the entire house, gardens and outside-buildings, blessing them with the newly blessed Theophany Water, while all sing the Troparion and Kontakion of the feast. This is normally done on Theophany, or at least during the Afterfeast, but if the parishioners are numerous, and especially if many live far away from the church, it may take some time to bless each house. Traditionally, these blessings should all be finished before the beginning of Great Lent).

Afterfeast: The Feast of Theophany is followed by an eight-day Afterfeast on which the normal fasting laws are suspended. The Saturday and Sunday after Theophany have special readings assigned to them, which relate to the Temptation of Christ and to penance and perseverance in the Christian struggle. There is thus a liturgical continuum between the Feast of Theophany and the beginning of Great Lent.

The explanation of Epithany is from Wikipedia. The Wikipedia entry is much more extensive.