Aphrodite and the Gods of Love. Boston, USA. Exhibition. 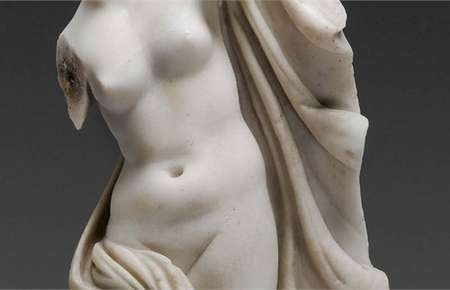 Other sculptures and paintings:

Statuette of Aphrodite emerging from the sea,Greek or Roman, Eastern Mediterranean, Hellenistic or Imperial Period, first century BC or first century AD.

The object of beauty

Love, desire and yearning sizzle through the hallways of the Boston Museum of Fine Arts this winter where the “Aphrodite and the Gods of Love” exhibition pays homage to the fiery and furious goddess of love.

The display of 170 Greek and Roman works of art, including thirteen significant loans—nine from Italian museums—will take visitors on a five-thousand-year trek from the deity’s birth from the foamy waters of Kythera.

Aphrodite and the Gods of Love

“Aphrodite and the Gods of Love” is organized by the Museum of Fine Arts, Boston, in association with the J. Paul Getty Museum. When the exhibit closes at the MFA on February 20, it will make its way to the Getty Villa in Malibu, California where it will be in view from March 28 to July 9. After that it will go to be displayed in New Mexico at the San Antonio Museum of Art from September 15, 2012 to February 17, 2013 and then at the Philbrook Museum of Art in Tulsa, OK from March 10 to May 26, 2013.