Consumption of a boiled Greek type of coffee is associated with improved endothelial function: The Ikaria Study 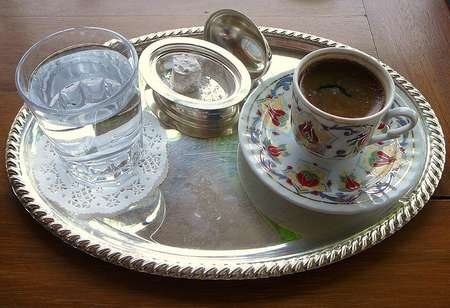 [What follows is part of the article. Numbers refer to references that can be obtained from the full article..

Methods: The analysis was conducted on 142 elderly subjects (aged 66–91 years) of the Ikaria Study. Endothelial function was evaluated by ultrasound measurement of flow-mediated dilation (FMD). Coffee consumption was evaluated based on a food frequency questionnaire and was categorized as ‘low’ (< 200 ml/day), ‘moderate’ (200–450 ml/day), or ‘high’ (> 450 ml/day).

Coffee is one of the most frequently consumed beverages and several studies have evaluated the association between chronic or acute coffee consumption and cardiovascular disease risk. [1–5]. Recent studies suggest a slight risk reduction for coronary heart disease mortality with moderate coffee consumption. [6,7] Moreover, favorable effects of chronic caffeine administration on endothelial cell migration, on re-endothelialization and on the expression of nitric oxide synthase enzyme have also been reported. [8,9]
It is known that endothelium plays a key role in vascular function and parameters of vascular function and structure show important clinical impact and are associated with cardiovascular risk. [10–12] Endothelial function, which is usually quantified by flow-mediated dilatation (FMD) in the brachial artery, [13] reflects the ‘health’ of the vessel wall and is affected by various lifestyle habits (e.g. smoking) and aging. [14,15]

Ikaria island inhabitants have been recognised as having one of the highest longevity rates universally and a high percentage of healthy aging. [16,17] Indeed, in Europe, only 0.1% of the population lives over 90 years, while in Ikaria the percentage is roughly 1%. As Ikaria’s elderly population consists of an isolated rural group with established lifestyle conditions, the study of the factors related to cardiovascular risk seems interesting.
To our knowledge, there are no clinical studies evaluating the effects of chronic coffee consumption on endothelial function, especially in subjects with established cardiovascular risk factors such as elderly individuals. Therefore, under the context of the Ikaria Study, [17,18] we examined the association between habitual coffee intake and endothelial function.

The Ikaria epidemiological study17,19,20 has been carried out in the Province of Ikaria, in Greece. In brief, during 2009, a volunteering-based, multistage sampling method was used to enroll 673 permanent elderly inhabitants of Ikaria above the age of 65 years old. The participation rate was 95%. Of the aforementioned sample, we randomly selected one of every fifth participant entering the study in order to evaluate his/her endothelial function; thus, 71 men (75 ± 6 years) and 71 women (75 ± 6 years) were studied in this project. All participants were interviewed by trained personnel (cardiologists, general practitioners and nurses) who used a standard questionnaire developed for the purposes of the study.

The study was approved by the Medical Research Ethics Committee of our institution and was carried out in accordance with the Declaration of Helsinki (1989) of the World Medical Association. All subjects were informed about the aims of the study, agreed to participate and signed an informed consent.

Anthropometric, clinical and biochemical characteristics
Weight and height were measured using standard procedures and body mass index (BMI) scores were calculated as weight divided by height squared (kg/m2). Resting arterial blood pressure was measured three times in the right arm at the end of the physical examination with the subject in a sitting position. Patients whose average blood pressure levels were greater or equal to 140/90 mmHg or were under anti-hypertensive medication were classified as hypertensive subjects. Fasting blood samples were collected between 08.00 and 10:00 hours. Blood lipid examinations (serum total cholesterol, high-density lipoprotein (HDL) cholesterol and triglycerides) were measured using a chromatographic enzymic method in an automatic analyzer (RA-1000). Low-density lipoprotein (LDL) cholesterol was calculated using the Friedewald formula: (total cholesterol) – (HDL cholesterol) – 1/5 (triglycerides). The intra- and inter-assay coefficients of variation of cholesterol levels did not exceed 3%, of triglycerides 4% and of HDL-cholesterol 4%. Hypercholesterolemia was defined as total serum cholesterol levels greater than 200 mg/dl or the use of lipid-lowering agents. All biochemical evaluations were carried out in the same laboratory that followed the criteria of the World Health Organization Reference Laboratories. Diabetes mellitus type 2 was determined by fasting plasma glucose tests and was analyzed in accordance with the American Diabetes Association diagnostic criteria (fasting blood glucose levels > 125 mg/dl (7 mmol/l) or use of special medication, indicating the presence of diabetes).

All variables were tested for normal distribution using the P-P plots. The values of triglyceride levels were skewed; thus they were log-transformed to improve normality. Normally distributed variables were expressed as mean ± SD and not normally distributed variables were expressed as median with first and third quartile. Student’s t-test or analysis of variance (ANOVA) were used to compare the mean values of normally distributed variables (i.e. age, BMI, FMD) between different categories of qualitative variables (i.e. coffee consumption). Post hoc analysis after Bonferroni correction was applied to test for pairwise differences between study subgroups. The chi-squared test was used to evaluate dependency between categorical variables (i.e. diabetes mellitus, smoking status and coffee consumption category). Multiple linear regression analysis was used to test for the association between FMD and coffee consumption categories, after adjustment for several covariates known to affect endothelial function. Statistical significance was indicated byp-values < 0.05. Plots of standardized residuals against predicted values were used to evaluate models’ assumption of homoscedacity, while the Durbin–Watson statistic was used to test for serial dependency. Collinearity between independent variables was tested using the VIF criterion. Cook’s distances were used to check for influential points in the regression analyses. All statistical analyses were performed using SPSS software (version 18.0; SPSS Inc., Chicago, IL, USA).
Power analysis with a type I error of 0.05 and a standardized difference of 0.30 in FMD between the three coffee consumption groups revealed that the number of enrolled individuals has a power of > 80% to reveal statistical significance differences.

[This is only the first part of the article. Download the full article as a .pdf in the reference provided above.]