Singing in the New Year 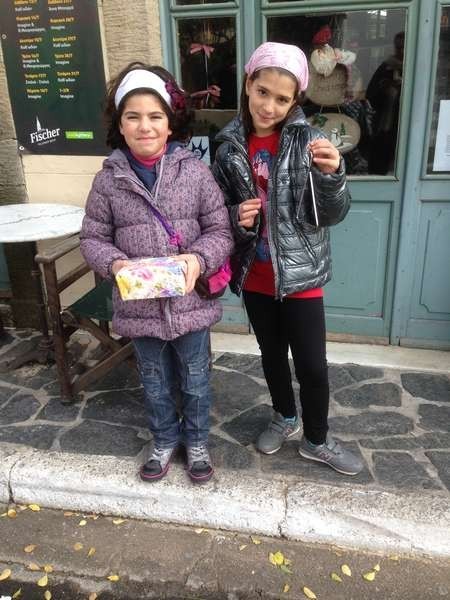 One of the most endearing Greek / Kytherian traditions is "singing in the New Year". Children go around the island in large groups, or in smaller groups (like these two young girls outside Astikon in Potamos), or as individuals.

They carry a triangle with them, ask the person or shop owner whether they can sing in Xmas / the New Year / Epithany, and after singing their carol, they are rewarded with money, which is put into a money box, which they carry with them.

A very old custom which remains today practically unchanged is the Greek Christmas carols, which is called calanda in Greek. Children, in groups of two or more, still make the rounds of houses singing carols, usually accompanied by the triangle or guitars, accordions or harmonicas.

The children go from house to house, knock on doors and ask: "shall we say them?" If the homeowner's answer is yes, the kids sing the Christmas carols for several minutes before finishing up with the wish, "And for the next year, many happy returns." Years ago the homeowners offered the children holiday sweets and pastries, but today they usually give them some money.

The carols are sung on the eves of Christmas, New Year and Epiphany, and they are different for each holiday.

History of Christmas Carols in Greece

The word calanda stems from the Latin calenda, which translates as "the beginning of the month." It is believed that the history of caroling goes deep into the past and connects with ancient Greece. In fact, they have even found carols written in those distant past days which are similar to the ones sung today. In ancient times the word for carols was Eiresioni , and children of that era held an effigy of a ship which depicted the arrival of the god Dionysos. Other times they held an olive or laurel branch decorated with red and white threads, on which they would tie the offerings of the homeowners.

This Eiresioni song from the Homeric period can still be heard today - with small changes - in the carols of Thrace:

In this house we came of the rich-landlord
May its doors open for the wealth to roll in
The wealth and happiness and desired peace should enter
And may its clay jugs fill with honey, wine and oil
And the kneading tub with rising dough.

Following are the Greek carols for each of the three holidays: Christmas Carols, New Year Carols and Epiphany Carols.

In the cave he is born
Within the horse manger
The king of the heavens
And Maker of all . . .

St. Basil is on his way
And will not deign on us
From Kesaria
You're a Lady milady

Down the Jordan River
Sits our Lady the Blessed Virgin Mary

She carries an organ, a candle she holds
And pleads with St. John.

St. John lord and Baptist
Baptize this divine child of mine

I shall ascend to the heavens
To gather roses and incense

Good day, good day
Good day to you master and the missus.