Photos > Miscellaneous > A Flag for Kythera. Proposal 2. Proposal utilising one of (wo)mankind's most ancient, primal and powerful symbols.

A Flag for Kythera. Proposal 2. Proposal utilising one of (wo)mankind's most ancient, primal and powerful symbols. 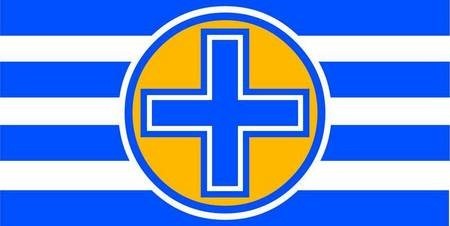 This symbol is based on the original symbol for Aphrodite - Venus (Venus is the Romanised version of Kythera's Aphrodite).

The symbol for Venus, based on the even older Egyptian symbol of the ankh, is that which is now being used in the Western World for the symbol of womanhood, ie, a cross placed on a circle.

The symbol for womanhood, in its current form, would not be an appropriate symbol on which to base a flag for Kythera.

It is too obviously associated with womanhood. The association could never be broken. The only way forward is to alter the symbol in a subtle way.

Hence I have removed the cross from periphery of the "womanhood/Aphrodite" symbol, and placed it in the centre of the circle.

The visual allusion to the Greek cross and the Greek national flag is deliberate.

Good iconography and vellilography is based on the principle of "distillation to essence" - in this case it responds to the question - "what is the minimal visual data that can be used to denote a particular entity or place - in this case Aphrodite, and by extension Kythera"?

In iconography and vellilography - "less is more".

To appreciate the power and primal nature of the womanhood/Aphrodite symbol - go to:

This symbol is also used by astronomers to designate the planet Venus (Aphrodite).

351:I guess I'm jumping in on something that has been in discussion but here it goes. Doesn't the island of Kythera have its own flag - just like the states of the USA have? Couldn't that be used? Ok if not, and we have this over-powering need to have a flag, why not superimpose the statue of Aphrodite di Milos over the blue and white stripes? After all, she DID start off in Kythera and there was a large community/temples dedicated to her that are being discovered in the sea offshore. OR, we can superimpose a sketch of the island itself against the blue and white stripes! Is this going to be KFN's logo? Just a few suggestions

352:1. The municipality of the island of Kythera does NOT have an official flag. 2. All mature and self-confident political entities should induct and maintain symbols of power. I have argued that case very strongly when discussing the newly inducted Kytherian Medal of Honour. Can you imagine the United States of America without an official Flag or an official Coat of Arms? 3. Real physical symbols - like a "Venus di Milos" - ie Kythera's Aphrodite - make very poor "devices" on flags. If you were to draw up a list of the 10 best-designed flags of the World, all would be based on abstract geometrical images - which "stand in the place of" more "real" or broader "concepts". Instance the flags of Japan, USA, Great Britain, Canada, Sweden,....even Greece. My argument above is that a "cross on a round circle" is Aphrodite...and hence is Kythera. 4. One of the poorest designed flags in the world is that of Cyprus - a map of the island. Resorting to a map indicates a failure of vexillographic imagination. Promulgating for a "flag with a map on it", indicates vexillological naivity. 5. This in NOT a kythera-family.net logo. This represents a genuine attempt to arrive at an official flag, (with gravitas), for the municipality & island of Kythera.

353:Ahh! ok but do the natives want it? if so, they ought to be the ones to design and select it! It's one thing for us to develop an identity for KFN; it's another to enter into the politics of the Island. I personally think it's an area we as an organization ought to stay clear of!

354:Couldn't agree LESS! 1. The history of Kythera is the history of how exoteriki Kytherians have consistently supplied both monetary ($) capital and "intellectual capital" - ie., ideas to the island. This export of capital has been critical in the islands development. Instance, projects such as the agricultural school, the Aged Care Facility, the Hospital, restitution of churches....even, water supply to Karavas... ..funding for intellectual and heritage pursuits, such as those undertaken by the Society of Kytherian Studies.... More recently ideas about waste recycling, and heritage preservation concepts...... I could go on and on. Even kythera-family is a an idea that could never have been "realised" on Kythera ....or would never have derived from Kythera...or been financed on Kythera. 2. How many vexillographers and vexillologists live on Kythera, or live in Greece, who are of Kytherian descent? My guess......NIL. 3. Your comment implies what I regard as a false distinction between Kytherians who live on the island, and those who live on larger islands....like Australia. I am fully registered in Karavas, and on Kythera, and in Greece as a citizen; and have every right (even duty) to try and "advance" the affairs of Kythera in every possible way, within my means. 4. My comments are made as a citizen of Kythera. Not as an executive of kythera-family. I consistently influence the affairs of Kythera in many ways, aside from my involvement in kythera-family. 5. Ultimately, the questions to be answered are: a. Is George Poulos's observation, that symbols of civic pride and power, such as a Municipal Flag, and Municipal Coat of Arms are missing from the "heraldic armory" of Kythera, correct.....or incorrect? b. If we agree that they are missing, should efforts be made to induct these symbols of civic pride and power? c. Can we identify persons who have the heraldic, vexillological and vexillographic knowledge to help design such symbols of Kytherian pride and power? I believe that Kytherians living on Kythera can readily be persuaded to induct both a Kytherian Flag & a Kytherian Coat of Arms. Of course, the municipal government of Kythera will be the ultimate arbiter of which Flag and which Coat of Arms will be chosen. I am simply getting the process started by making a few suggestions.

355:Crickey! Obviously I hit a sore point with you, George. So you're a citizen of Kythera and by extension, Greece. Good for you! You've gone one more step than many of us. But do you live there full-time? And, beside, you will never live on the same level of life as the natives. I know you're trying to push for change for the betterment of the islanders. Just be sure that it doesn't appear to be too demanding from an "outsider" (citizenship not withstanding) Despite your tirade, your "flag" makes a mockery of the official flag of Greece. That flag has a CROSS on it meant to symbolize CHRIST! In your scenario, the cross stands for Aphrodite. Please go back and rethink your design. In the USA, each state has its own flag without stars and stripes in the background. California has a grizzly bear on field of white with a red star in the left corner. The Kytherian flag needs to reflect something historic about the Island. But a Kytherian Coat of Arms? not really necessary for Greeks! We're not British nor would an entire island have one -- that's usually reserved for CLANS.

356:1. Your lack of iconographic, vexillological, vexillographic, and heraldic knowledge is obvious. Fools rush in, where angels fear to tread! 2. All government instrumentalities should have symbols of power. Do take some time out and read my "line of reasoning" for this, in the article about the newly inducted Kytherian Medal of Honour. This was instigated by Kytherians living in Athens. Rest assured that Kytherians resident on both Kythera, and in Greece, are very aware of this particular deficiency - (lack of Flag & lack of Coat of Arms) - in the Kytherian heraldic armory. 3. In heraldry, the so called Greek Cross is a symbol of Christ. The fact that it is also designated here as part of a symbol designating Aphrodite - does not preclude the fact that the Christ symbolism is also inherent in this design. Of course the cross in this "suggestion" also symbolises Christ. How did this either/or type of thinking creep into the discussion. [Are the stars on the flag of the USA symbolic either of the "home of the brave" - or the land of the free?] Symbols and icons can multitask. They are multivalent. 4. The flag of the USA is one of the great flags in world history. The quality of the flags of most of the states of the USA, lack this same vexillographic quality. 5. Coats of Arms are not "British" devices. They are used universally. Greece, and each of the "provinces" of Greece, possess Coats of Arms. At some point in the near future - Kythera will as well. When the inevitable selection process occurs, I strongly doubt that you will be on the selection panel, that will choose both the Flag and Coat of Arms of Kythera.