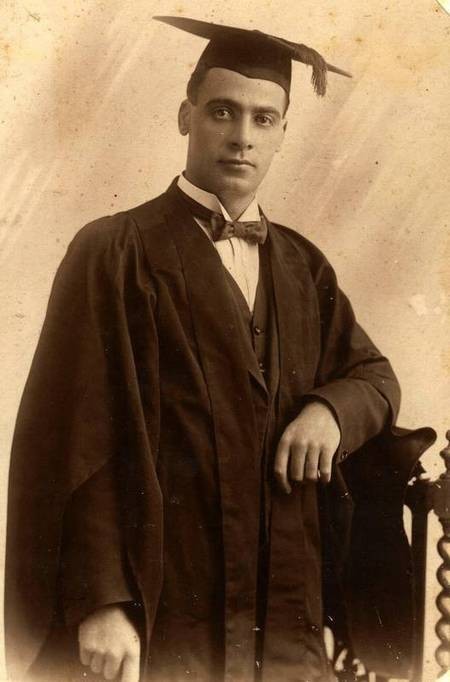 Michael Potiri was born in Mylopotamos on the Greek Island of Kythera. He arrived in Sydney on 31 July 1907. Michael joined his brother George at Barraba, NSW for nine months and Walcha for eight months where George taught him the cafe trade. Michael acquired a cafe business in Vincent Street, Cessnock in late 1908 which he ran prior to moving to Queanbeyan in mid 1913 where he bought a cafe in Queanbeyan known as the Canberra Cafe (aka Canberra Dining Rooms). A few months later, Michael's brother Peter joined him from Walcha. Peter Condoleon, Michael's ship mate and brother-in-law to his cousin Andronicus also joined him in the cafe.

In March 1915 Michael applied for naturalisation. A personal reference with his application describes Michael's business as follows: "....a fairly large and profitable restaurant business - employing from three to five of his countrymen in the main street of the town and purchased by him at a cost of upwards of £600". A police report the same year from Cessnock Police reported Michael to be "...sober, industrious and respectable and in everyway a desirable citizen". A Certificate of Naturalisation was issued to Michael on 23 April 1915.

In 1920, Michael Potiri took a very different direction in his life and decided to study medicine. He left his brother Peter to run the business in Queanbeyan while he studied his leaving certificate at Christian Brothers, Waverley NSW. Despite not being listed in the usual enrollment register at Waverley, it seems likely that as a mature age student he consolidated two years into one. The 1925 Sydney Uni yearbook quotes: "He passed the LC with several months' intensive study."

Michael Potiri changed the spelling of his surname back to the original Potiris, unlike his brothers and sisters who maintained the shorter version, namely Potiri. 'Mick' as he was commonly known, began studying at the Sydney University Medical School in 1921. He is listed in the 1925 Year Book, however, he graduated in 1926 with a Bachelor of Medicine. Mick worked at Royal Prince Alfred Hospital during his studies. He established a medical practice on the corner of Norton Street and Macauley Street, Leichhardt c.1935 where he lived with his sister Helene. It is possible that Dr Mick Potiris was the first Greek migrant in Australia to graduate with a Bachelor of Medicine.

While playing tennis in 1936, Mick met Audrey Foulsham who lived at Randwick at the time and was the daughter of one of Sydney's well known racehorse trainers. Approximately six years later on 7 February 1942, Michael and Audrey married in the Christ Church St Laurence Church of England, Sydney. After their marriage, they moved to Randwick.

Dr Mick Potiris practiced as a medical practitioner for 22 years at his Leichhardt surgery before his death at their Randwick home on 18 August 1948. He was survived by his wife Audrey and cremated at Botany Cemetery.