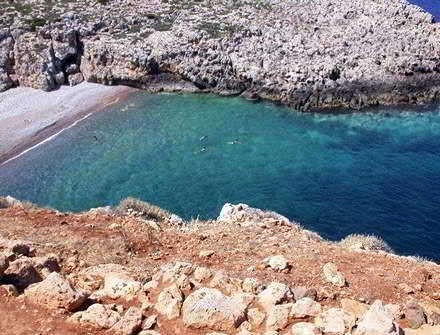 The island is also called Tsitigoto, from the name Cerigoto given by the Venetians, or even, Lee (Lioi), perhaps from the Aegila, the ancient name of the island. The island was of great strategic importance due to the position between Kythera and Crete. It flourished from 400 BC depended on the city Phalasarna located at the north western Cape Gramvoussa of Crete. The city was a pirate base and it seems that the island was a milestone for the protection from the north. Phalasarna was destroyed by the Romans during their campaign against the pirates in 69 to 67 BC and Aegila had the same fate.

In the area of Kastro are the ruins of the ancient Aegila. Lower, in the small bay of Xeropotamos, are the remains of the harbor and of a sanctuary of Apollo. The earthquake that shook southern Greece in 365 AD also had an effect on the Antikythera. The level of the sea and the coastline changed and the land was elevated two to three meters.
The island was inhabited again after the 4th century AD. At some areas the remains of Byzantine settlements have been found. In 1204 the island was occupied by the Venetians, like many other islands. The Venetians named Tsirigo (Cerigo) the island of Kythera and Tsirigoto (Cerigoto) the island of Antikythera. They remained until 1800 and Tsirigoto became a refuge for many people who left from Crete and Peloponnese after the Ottoman conquest. In 1815 together with the other Ionian Islands it was dominated by England and used as an exile place for the radicals of the islands. In 1864 the Ionian Islands were united with Greece. Cretans came once again to the island after a new insurrection in Crete. Most of today’s residents come from Sphakia Crete. In the early 20th century the inhabitants were 334, but many fled abroad as immigrants.

Round the island – The beaches

Centre of life is Potamos, port and capital at the head of a bay that goes deep into the north coast, forming a safe anchorage. Of particular interest is the watermill of Andronicus, traditional building maintained throughout. Strolling around we will also see five windmills, built in the 19th century. There are seven churches on the island. In Potamos Aghios Charalambos, Aghios Nickolaos at the entrance of the harbor and the twin church dedicated to Panagia (Virgin Mary) and Aghios Dionyssios; in the settlement Pateriana Aghios Konstantinos, in Katsaneviana Aghios Georgios and in Galaliana Aghios Myron, protector of the island. High on the hill is Prophetes Elias.

We can swim at the beach Chalarain Potamos, as well as the beach of Xeropotamos east of the capital. The area of Xeropotamos has great archaeological interest. Over a small bay is Kastro (Castle), the ancient city of the Hellenistic era. The city spread over an area of 300 acres and lived there until the 1st century BC. The walls were built in 300 BC and in many places reach a height of six meters. The archaeological research continues every summer in August and September. Currently, visitors are guided by the archaeologists. In the bay of Xeropotamos was the port of the ancient city. We can see some of the points where the ships were tied. In the cove are the ruins of a sanctuary of Apollo; here a headless statue of the god was found. In the rock is carved a ship sheds, a sloping space to store a pirate ship or warship; it is one of the few preserved intact in the Greek area. Interesting are also the remains of the Byzantine era. In Charchaliana, near Potamos, a settlement was created in the 4th or 5th century, which lasted until the 7th or 8th century. Graves and wine presses are carved into the rock. Byzantine remains also exist elsewhere. One of the most beautiful areas of the island is Kamarela, southwest of Potamos, in the middle of the west coast. It is a magical little cove surrounded by cliffs with an amazing sea.

At the southern tip of the island, Cape Apolytara, is one of the most historic Greek lighthouses. The Apolytara Lighthouse was built in 1926 and is an architectural monument. There were lighthouse keepers until 1987. In 2004 following a proposal by the Community of the island the Navy decided to fully preserve the building and manned lighthouse keepers again. It is better to go by sea. There are paths that start at Katsaneviana or at Galaliana but be very careful along the way.