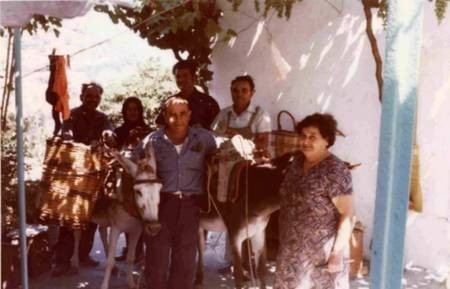 My father, Con George (Tzortzo)Poulos, was a reluctant traveller. He constantly resisted his own urges to travel back to Greece and Kythera.

However, when he succumbed, and he was on the island, he always enjoyed himeself.

The following is taken at the Tzortzopoulo patriko spitti, in Karavas.

The house is tucked into the hillside, on the left, as you walk down from the steps leading up to Ayios Haralambos, towards Koronianika.

Ri Ri. My fathers older brother Theothori - married to "Mummi" - the midwife. Tzortzopoulos patriko spitti was always owned by my father - and he always allowed his brother to live there free of charge.

Yia yia, Kirrani Souris, from Yerakari, who lived in my great-grandfather's Theothosios's house, on the 90º bend which leads down to the kendro at Amir Ali. Kirrani was my grandfather's (my namesake) Trunduphilos's second wife.

Bubbi(?) (front) our neighbour across the way, who tends our fruit trees, and grapevine, with his two working donkeys.

Rouli Logothetis, brother of Harry Logothetis from Logothetyianika, who married my mother's younger sister - Voula. Rouli, for decades the carpenter in Potamos, lives on Ayia Pelagia.

Con Poulos, of Gilgandra Fruit Mart "fame", and later of Greystanes, near Parramatta, in Sydney, NSW.

I Mummi, the midwife, wife of Ri Ri, and one of the great personalities of Karavas. Many Karavites and Kytherians on the island where bought into the world by her.