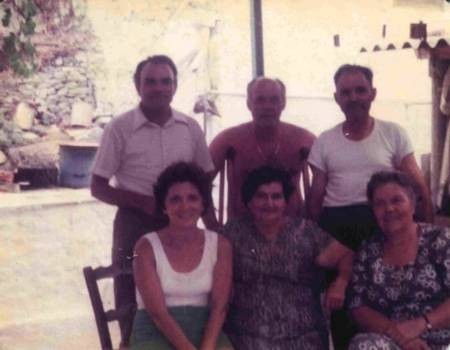 Con Poulos, of Gilgandra Fruit Mart "fame", and later of Greystanes, near Parramatta, in Sydney, NSW.

He became a fairly good artist, and painted many Kytherian and Hellenic scenes in his life time. At this time he was making an attempt to transplant himself back to Kythera, having left at age 12, to settle in Australia.

He stayed for a few years, but his unconventional ways led to a number of clashes with authorities - which he could not abide.

He returned to Australia, and retired to live in Bargara, a coastal town near Rockhampton, in Northern Queensland.

Ri Ri. My fathers older brother Theothori - married to "Mummi" - the midwife. Tzortzopoulos patriko spitti was always owned by my father - and he always allowed his brother to live there free of charge.

I Mummi, the midwife, wife of Ri Ri, and one of the great personalities of Karavas. Many Karavites and Kytherians on the island were bought into the world by her.

Bargara is not near Rokky its about 10 miniuts from Bundaberg