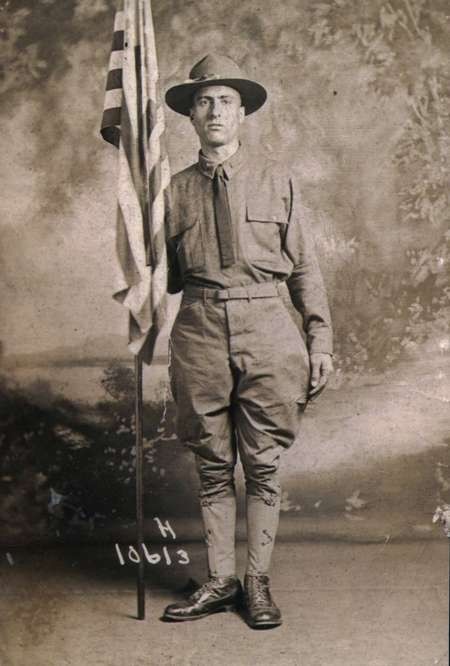 Haralambos (Harry) Theodoros Sofios (March 1894--July 1946) son of Theodoros Ioannis Sofios (Stravokanis) and Anastasia Moulou was born in Logothetianika. He left Kythera for the US in 1907 at age 17. There were 10 fellow Kytherians on the SS Moraitis on that voyage including: Nick Kassimatis (age 42), Panagiotis Kassimatis (age 12), Theodore Kassimatis (age 26), George Margetis (age 49), Dimitrios Lorandos (age 23), and Emmanuel Malanos (age 25). After landing in New York, Harry joined his older brother John in Indiana, Pennsylvania to find work in a thriving center of the anthracite coal mining industry.

Family members spent their early years in Pennsylvania, Missouri and Ohio. Harry settled in Bowling Green, Ohio where he was the proprietor of the Paris Dry Cleaners. He returned to Kythera in 1929 to marry Eleni (Helen) Tamvakis, daughter of Kyriakos Tamvakis and Grigoria Koukoulis of Katsoulianika. They left for the US in June of 1929. They had four sons, Theodore, Kyriakos (Charles), Nicholas, and John.

Harry was never able to return to Kythera. He died in 1946. Helen revisited Kythera with two of her sons in the 1960’s. She died in Oakland, California in 1971. Harry and Helen are buried in the Bowling Green, Ohio cemetery.

Gregory , how are you related to John Sofios?

I am John Sofios' nephew. I am Nick Sofios' son. Harry was my grandfather, whom I never met.

We are related somehow, as my Dad always would refer to your family in Bowling Green and Norwalk as Cousins. Your Uncle Chuck lives near me .I use to go down to visit your Grandma in Bowling Green

I spoke to my father and he confirmed you were a friend of the family and a relative. Great to hear from you! My mother has been in touch with my fathers Aunt Ana in Australia, and she supplied the photos and the information in the captions. I hope you like the postings.

life great at the top ..