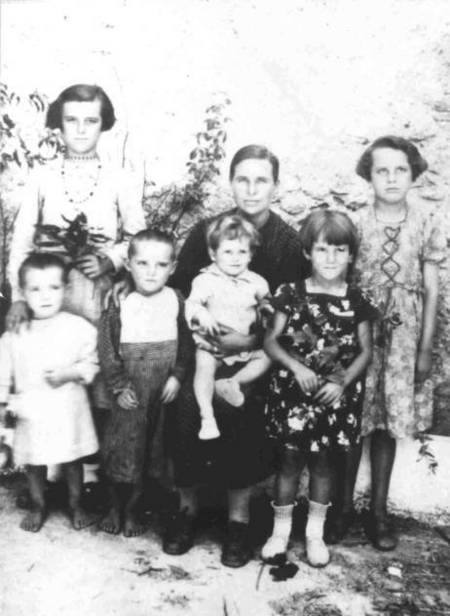 The grande matriarche of Karavas, Louisa Psaltis (nee, Kritharis) [See, People, subsection High Achievers section for details about Louisa's life], was a close friend of Yeorgia Mentis. Louisa described her as the prettiest and most vivacious young girl of her generation.

She died tragically in child-birth whilst giving birth to her 7th child. To see a photograph of Yeoryia and Triunduphilo in the months prior to this event go to:
http://www.kythera-family.net/index.php?nav=104-111&did=7346-1&searchResult=searchResult

This followed a trend in the family - my Great-grandfather Theothosios - also lost his first wife - Zufaria in childbirth. He was so devastated by her death - that he walked away from the house in which they lived - and never returned to it. The house is now iripio - in ruins. It lies in an area called Rupyanika.

Death during childbirth was common in Kythera during the 19th and early 20th century. It is a theme which demands far more attention on kythera-family.

Older brother Theo Koroneos (Corones), later to lose a leg to infection, and become a prominent artist of Kythera, had probably already migrated to Australia, when this photograph was taken. He left as a young boy, sponsored by his Uncle George and his auntie Georgia, later of Beverley Hills, Sydney. Theo drove taxi's in Sydney for many years, before retiring to Bargara, in Northern Queensland. He died in Bargara on the 8th September, 1998.

On the far left hand side is the second oldest child, Stamatoula (Toula), later to marry a Vaggis (Vanges) - and to live in Germany for many years. In later life she moved to Australia, where she was tragically killed in a road accident near Bathurst, New South Wales, on the way to visiting her younger brother and sister, Manuel and Voula, in Gilgandra, NSW. She was 49 years of age. Her two youngest sons, George and Nick, then aged 21 and 19, were also killed in the car accident. The date was the 25th December 1975.

My mother is Envangalia (Angela) Coroneos, originally of Gilgandra, NSW, and later of Pendle Hill, NSW. She is standing on the far right hand side of the photograph.

She was sponsored to Australia by her aunty and uncle, Peter and Chrisannthe (nee, Koroneos) Katsoolis, then living in Wyong NSW. Later they would retire to Rainbow Street, Kingsford.

To see a photograph of her taken in an orchard in Wyong, soon after her arrival in Australia, see:
http://www.kythera-family.net/index.php?nav=117-118&did=7981

In 1951 she would marry Con George (Tzortzo)Poulos, Hlihlis, also from Karavas, and they would live in the central western NSW town of Gilgandra for the next 20 years, before moving to Pendle Hill, in western Sydney, to retire.

In front of her is her sister Helen, later to marry George Calligeros, and live and work in Dubbo, NSW. She has since moved to Canberra. To see a 2004 photograph of Helen, and to read her slightly more detailed life-history, from a newspaper article in the Daily Liberal, Dubbo, go to:
http://www.kythera-family.net/index.php?nav=117-119&did=2230-1&searchResult=searchResult

Standing next to his mother on the left is Nickola (Nick) Coroneos. As detailed in the Dubbo newspaper article Helen and Nick arrived together in Australia, sponsored by their paternal uncle Nick, of Blacktown shop, and North Parramatta, "fame".

Nick would move to Gilgandra, NSW, and work for more than a decade in two fruit shops owned by his brother-in-law Con George (Tzortzo)Poulos.

To see a photograph of Nick standing in the first of the two fruit shops, at 41 Miller Street, Gilgandra, soon after his arrival in Australia, go to:
http://www.kythera-family.net/index.php?nav=117-118&did=6024-1&searchResult=searchResult

Nick married a young woman he met, whilst she was working at the ABC Cafe Beryl Palmer, on 12th June 1960. Nick and Beryl both worked in the Fruit Shop for many years, before moving to live in Wentworthville, in western Sydney. Nick Coroneos died at the tender age of 44 on the 26th May, 1979.

The younger boy standing in front of Toula, is Manuel Coroneos. Manuel would emigrate to Australia as a young man. He worked initially for George Miller's father Dimitri, in Chinchilla, Quensland. To see a photograph of Manuel at this time go to:
http://www.kythera-family.net/index.php?nav=117-120&did=5326-1&searchResult=searchResult

He would later move to Bankstown in Sydney, where he married Katina Lazanas, from Kensington, before acquiring the Warren Fruit Shop from Peter (Tzortzo)Poulos's widow Aryiro (Silvia) Poulos, (nee, Aloizios). Later in life he moved to Sydney, where he became a successful greyhound owner and trainer.

The youngest child, seated on Yeoryia's knee is Voula, (Stella), who was sponsored to Australia by sister Angie. She married Haralambos Logothetis, Harry Logus, and they lived in Dubbo for many years. To see a photograph of Stella on her wedding day go to:
http://www.kythera-family.net/index.php?nav=117-132&did=5683-1&searchResult=searchResult

Later they acquired the Gilgandra Fruit Shop, which they ran for more than a decade. Upon selling that shop, they moved back to Dubbo, and later, to Canberra.