submitted by Kytherian Cultural Exchange on 22.09.2007

Aphrodite and the Mixed Grill. Greek Cafes in Twentieth-Century Australia. 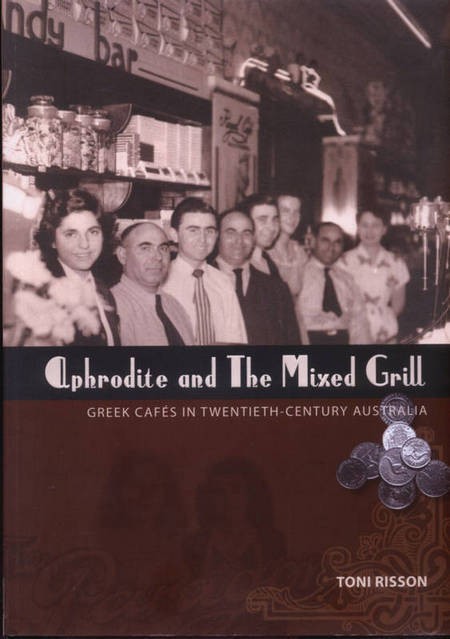 
Composite Front-Back Cover as a .pdf


The Greek cafe is a shared chapter in the histories of Greece and Australia. Milk bars and cafes enabled generations of Greek immigrants to establsih themselves in their adopted homeland, and their shops became part of the social fabric of Australia. But that chapter is almost over.

Aphrodite and the Mixed Grill: Greek Cafés in Twentieth Century Australia celebrates­ the role Greek cafés played in Australian culture. It relates stories about emigrating and buying into Greek cafe, coming to Australia as a cafe bride, growing up in a shop, and going through hard times, fun times, wartime, and day-to-day prejudice. It explains the food on a typical menu, the fate of villages on islands like Kythera, and why cafes have now all but melted into history.

Beautifully produced in a soft cover, its 200 pages are jam-packed with colour photographs of Greek cafes, including Katoomba's Paragon Cafe, Gundagai's Niagara Cafe, and the dozen predominantly Kytherian cafes that dominated the Ipswich streetscape in the 1940's and 50's.

Toni Risson is a UQP childrens author, an Ipswich historian and a Universitv of Queensland Medallist.

This book is the culmination of four years of extensive research.

"Aphrodite and the Mixed Grill began with a small project recording the stories of three older Greek ladies whose husbands had cafés in Ipswich in the 1950s. I became so passionate about the story of the Greek café, and had such an enthusiastic response from other Greek people associated with cafés, that Aphrodite grew into a 240 A4-page book jam-packed with sepia photographs of cafés and their proprietors.

It is a high-quality production.

The Greek café is an Aussie icon and I believe that mine is the first book dedicated solely to this wonderful story."

Marina Londy (left) from Londy's Cafe in Ipswich visits the nearby Regal Cafe after school in 1952. George Kentrotis stands proudly behind the Regal's confectionery counter with two of his brothers, two other male relatives, and two Anglo-Australian female staff.

Milkshake machines, a metal straw dispenser, and scales for weighing loose lollies sit on the counter, and stylish pilasters emblazoned with the cafe's name and a neon sign featuring a crown frame a mirror on the wall behind them.

“From the beginning of the twentieth century, Greek cafés and milk bars forged an important place at the heart of the Ipswich community and when older Ipswich residents talk about them their eyes light up.” In her latest work, Aphrodite and the Mixed Grill, Ipswich author Toni Risson looks at how popular Greek cafes became important gathering places in the social life of nearly every town in Queensland and New South Wales. When the trend was at its peak towns such as Ipswich had many Greek cafes; Ipswich had a dozen.

A formal launch of the book, hosted by UQ Library and Arts Ipswich, was held at UQ Ipswich on Tuesday, 31 July at 6.00pm in Building 8. Ms Risson discussed her investigation of the role Greek cafés played in Ipswich’s cultural history, situating them in the context of Greek immigration and the Greek café phenomenon throughout Australia.

483:They were a quintessential part of Australian life for decades, then quietly faded away. But UQ academic Toni Risson is not letting the phenomenon that was the Greek cafe be forgotten. Ms Risson, a PhD student at the University's Ipswich campus, recently released Aphrodite and The Mixed Grill, a chronicle of Greek cafes in Australia. The book outlines how these Greek immigrant-operated shops combined the benefits of milk bars, rest stops and diners and brought American treats such as ice-cream sodas and sundaes to Australian towns from the turn of the 20th century to the 1970s. Ms Risson said Greek cafes had been part of the Australian landscape as a place to meet after going to the pictures, for travellers to stop on long journeys or families to visit while window shopping in the days before television. Towns such as Ipswich had more than a dozen Greek cafes when the trend was at its peak. “They were just everywhere; they were like McDonald's,” she said. “Apart from the face behind the counter, and sometimes the name (of the establishment), nothing else was Greek; they served milkshakes, toasted sandwiches, the mixed grill, simple British-Australian food.” While the food was familiar, the Greek faces and accents were not, and Ms Risson said many cafe proprietors bore the brunt of racism in a way other ethnic groups did not. “They were at the forefront of multicultural Australia, the Greeks were at the centre of the business district, they were at the centre of people's lives,” she said. Ultimately, Greek cafes began to close down in the 60s and 70s due mostly to the rise of television, better cars and American fast food outlets. According to Ms Risson, few traditional Greek cafes remain in Australia; the Niagara in Gundagai and the Paragon in Katoomba are the best known. Aphrodite and The Mixed Grill started out as an 8000-word dissertation for a one-semester subject Ms Risson took in 2005. She said once she began to learn about the Greek immigrants who ran the cafes, she realised the tale needed a book, not an essay. “It's just been a privilege for me to meet these people and be trusted with their stories,” Ms Risson said. An exhibition of the photos in Aphrodite and The Mixed Grill, called Greek Cafes in Ipswich, opens at Ipswich Art Gallery on August 11, coinciding with the Ipswich launch of the book. Media: Ms Risson on 0439 664 291 or Tegan Taylor at UQ Communications (07 3365 2339)