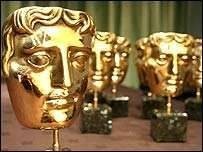 Penguin shares spotlight with the Queen.

The toe-tapping penguin film Happy Feet has picked up an award at the British version of the Oscars, but whether that has improved its chances of securing a Hollywood gold statue remains to be seen.
George Miller's film edged out Cars and Flushed Away to take the Bafta for animated feature, but the awards have only a patchy record of predicting who will pick up Academy Awards.

Helen Mirren, on the other hand, is an Oscar favourite after picking up another best actress award for her role in The Queen, which also won best film.
The movie's success continues to astonish even those involved. "We always thought it was a small film. Obviously it's a pretty parochial film in some ways," Mirren said. "But we had a clue when it was chosen by the critics in Venice that it would have a broader appeal."

On a cool, bright evening, the stars marched along one of the longest red carpets ever seen. For the first time the ceremony had an air of Hollywood gloss, having moved to the crimson plush of London's Royal Opera House.
Surrounding streets were closed, and with memories of the disastrous recent occasion when rain caused the red carpet to erupt into white foam, the last stretch was protected by a huge canopy.

The triumph for best actress and best film were the least surprising results of the night - the bookmakers stopped taking money on Mirren on Friday - but the awards were not the British clean sweep predicted by some. The James Bond movie Casino Royale failed to shake or stir, picking up just one of the nine nominations it received - winning the sound quality category. Its willowy new-style Bond-girl, Eva Green, took the hotly contested rising star award, the only one voted for by the public.

American Forest Whitaker took best actor for his mesmerising performance as Idi Amin in The Last King of Scotland.
The Spanish movie Pan's Labyrinth took best foreign language film, and the prizes for the extraordinary costumes and best make-up and hair, despite all the barnacles and octopus masks of Pirates of the Caribbean: Dead Man's Chest, nominated in the same category. Pan's Labyrinth's three prizes made it one of the night's biggest winners; The Last King of Scotland also took three.

The British director Paul Greengrass took best director for United 93, the documentary-style no-stars film about the passengers' struggle to take control of one of the hijacked planes on September 11, 2001. The film also took the editing award.

One of the most surprising losers - and there was an instant buzz of gossip about what this meant for its chances at the Oscars - was the hit Notes on a Scandal, based on Zoe Heller's bestselling novel, which was nominated in several categories, including for Judi Dench as best actress.
Another surprise was the success of a small American film about a dysfunctional family, Little Miss Sunshine, which won the best supporting actor for Alan Arkin, who plays a drug-addled grandfather, and the best original screenplay.

The British Academy of Film and Television Arts (BAFTA), is a British organisation that hosts annual awards shows for film, television, children's film and television, and interactive media. Since 1948, selected films have been awarded with the BAFTA award for Best Film at an annual ceremony.

Until 1968, two Best Film awards were given each year: Best British Film and Best Film from any Source (for non-British films). It was possible for British films to be nominated in both categories and, occasionally, to win both awards. Beginning in 1969, these awards were replaced with the single 'Best Film' award, and British films were longer distinguished.

The Queen clinched best film and Helen Mirren best actress for her portrayal of the monarch at the BAFTA British film awards today, while The Last King of Scotland scooped three awards.

Following are the winners on the night:

Short film - Do Not Erase

Rising star (voted for by the public) - Eva Green